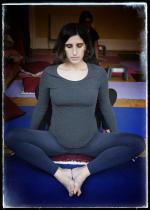 Pregnancy Yoga Birmingham hold pre natal, post natal, active birth and partner preperation classess in Moseley Birmingham. The brainchild of Paula Sims, Paula trained at the Active Birth Centre under Janet Balaskas and since qualifying in 2005 she has helped over 1000 women & their partners prepare for their babies birth. She has three children and began training shortly after attending active birth pregnancy yoga classes herself during her first pregnancy.